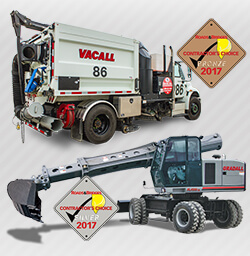 The awards were given in 42 categories as a result of balloting by contractors and industry material producers who evaluate construction equipment machines currently available.

Among the AllSweep’s other advantages is the industry’s widest sweep path and a single-engine design, which eliminates overall cost, service, fuel consumption and emissions associated with dual-engine sweepers. The broad sweep width capability—actually, wider than the width of the chassis—can make shorter work of big jobs using a single or dual sweep system to collect litter, stones, asphalt millings and debris. Another operator efficiency advantage is a new position memory feature to raise and then restore nozzle height when encountering curbs, speed bumps and other obstacles.

AllSweep models also come equipped with catch basin cleaner hoses, adding to the versatility of the machines. When not in use, the high-power vacuum hose, boom and tubes store compactly against the tailgate.

Recipient of a Silver Award in the Specialty Excavator category, the XL 4300 III excavator is exceptionally versatile as well as mobile. With a rubber tire undercarriage and four-wheel-drive, XL 4300 III excavators can be driven on paved surfaces without damaging the pavement, plus they are equally mobile off-road on dirt.

Unlike other excavators in the same class, the XL 4300 III models are distinguished by a design that enables them to pick and carry big loads around jobsites, working at the front, rear or either side of the machine without the need for outriggers. The XL 4300 III features Gradall’s famous telescoping boom, which can work on low-overhead jobs under bridges and trees – locations where conventional excavators with knuckle booms cannot fit.

Because the entire boom tilts, the XL 4300 III does not lose any power on high-productivity jobs like mass excavation, trenching, spreading rip-rap, demolition and pavement removal. The tilting boom also is able to place buckets, grapples, hammers and other attachments in the exact position required, and precisely place highway barriers without unnecessary swing.

Roads & Bridges magazine is one of the leading magazines covering the transportation construction and maintenance marketplace in North America.

All Vacall machines are designed and manufactured in the U.S. at Gradall Industries’ facilities in New Philadelphia, Ohio.

Vacall products, wholly owned by the Alamo Group, are designed, built and supported by Gradall Industries, Inc., with processes that meet ISO 9001-2008 standards. Gradall is known worldwide for productive, versatile equipment for governments and contractors.